WHAT TECHNOLOGIES ARE BEING DEVELOPED AT ABERDEEN PROVING GROUND? 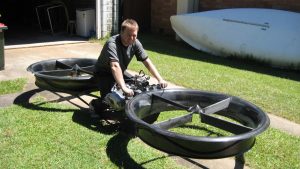 Shown above, the hoverbike
The Northeastern Maryland Tech Council is hosting an event April 28 that will touch on autonomous vehicles, digital agriculture, Watson and portable power.
What technologies are being developed at Aberdeen Proving Ground?

There are plenty of hints that interesting tech is being developed at Aberdeen Proving Ground. The Army facility to the northeast of Baltimore was one of the assets highlighted in an autonomous vehicle proposal, and emerges with the occasional hoverbike test.

But more times than not, it’s cloaked in an aura of secrecy.

In the near future, however, there’s a chance to hear more about what’s happening inside the walls. The Northeastern Maryland Tech Council is holding a half-day event to provide more info about the technology, and hopefully introduce ideas for collaboration.

The event is set to be held on the afternoon of April 28 at the Bel Air campus of Towson University, and will include breakout sessions and networking along with talks.

Gary Markovits of Innovation Business Partners will give the keynote on “Thriving In the Innovation Economy”. Tech topics include:

After the talks, participants can get together in breakout sessions and brainstorm how the technology can be used.

Stephen Babcock is the lead reporter for Technical.ly Baltimore. A graduate of Northeastern University, he moved to Baltimore following a stint in New Orleans, where he served as managing editor of online news and culture publication NOLA Defender. While there, he also wrote for NOLA.com/The Times-Picayune. He was previously a reporter for the Rio Grande Sun of Northern New Mexico.