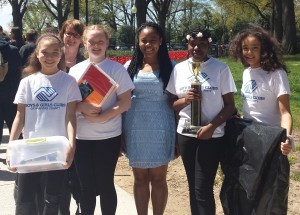 Teams from around the region participated in the Junior Solar Sprint competition on Aberdeen Proving Ground (APG) in April 2015, sponsored by the Army Education and Outreach Program. The team from Windsor Valley won first place and was invited to attend the national competition in Dallas, Texas, held during the Technology Students of America’s annual convention, in July 2015.

Originally the team had three girls, Adriana Pusey, Jordan West, and Kaylah Cain-Ward, sixth grade students at Magnolia Middle School and Club members at the Windsor Valley Boys & Girls Club. While at the original competition on APG, they were joined by Destani Cullari, from the Cecil County Boys & Girls Clubs. These four girls worked together to create 7 different solar powered cars–while making memories that will last a lifetime. They were surprised to receive the call last week, informing them of the invitation to attend the White House Science Fair.

ABOUT AEOP
More information is available at http://www.usaeop.com/ , at the Twitter handle @USAEOP and at www.facebook.com/goAEOP.