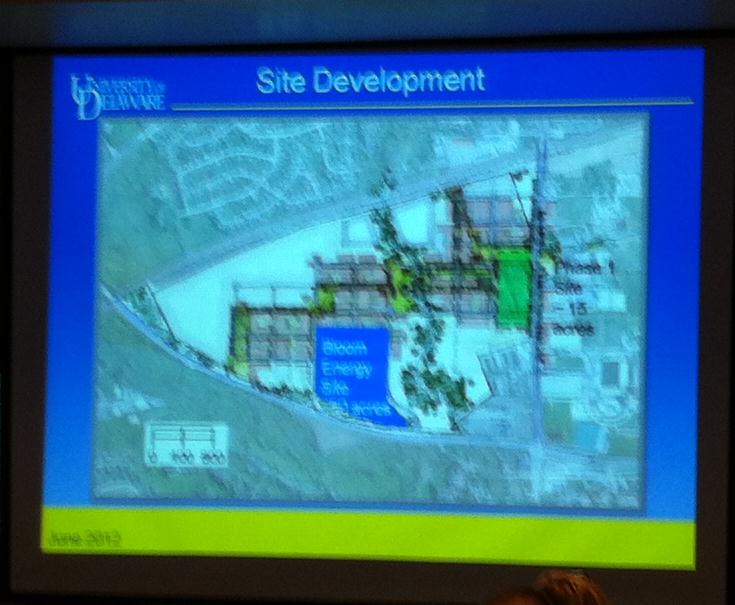 The University of Delaware’s Science Technology and Research Campus in Newark will not be a typical college campus with sprawling quads and august architecture. Nor will it be a typical real estate venture with high pressure sales deals designed to get the space occupied expediently.

Instead, UDel’s Board of Directors has laid out a vision for “slow, careful development with urban type density.”

That’s according to Andrew Lubin, UDel’s director of real estate. He spoke to members and guests of NMTC, the Northeastern Maryland Technology Council at the June 14, 2012 Expert Speakers Series. The meeting was hosted by Cecil College, whose president, Dr. Stephen Pannill, is a member of the NMTC Board of Directors.

Lubin said the 272-acre parcel was home to a Chrysler auto assembly plant. UDel’s offer of $24 million was accepted by the U.S. Federal Bankruptcy Court in 2009.

“Because of environmental and remedial unknowns, UDel was the only legitimate bidder,” Lubin said. “It could take 40 or 50 years to fully develop.”

The university plans to retain all land rights, but enter into ground lease agreements with private and public entities in the health sciences, energy, environment, national security and defense sectors.

Ground broke on Phase I in December 2011, with construction scheduled to begin this summer. Phase I will transform the existing Chrysler administration building and its environs into a space for health and life science teaching, research, and practice. Prospective tenants include scientific and academic entities including UDel’s College of Health Sciences, Department of Physical Therapy, Nurse Managed Care Center, Delaware Rehabilitation Institute, BADER Consortium and the Delaware Health Sciences Alliance.

That 15-acre parcel is all that will remain of the original development on the site. The rest will be developed by the ground lease holders.

UDel recently entered into an agreement with Bloom Energy to lease about 50 acres of the STAR campus, where the company will manufactures an energy product called “bloomboxes” as well as conduct research to improve its product.

“Clearing began in December of 2011,” Lubin said. “The goal is to attract their vendors and contractors, and two are in negotiations. The University of Delaware does liquid fuel cell research, so this has great potential for a collaborative relationship.”