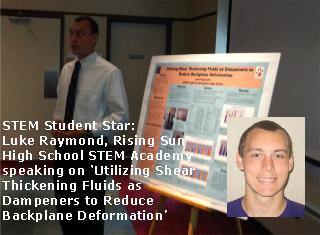 Luke Raymond was the STEM student speaker for the NMTC’s Expert Speakers Series held June 14, 2012 at Cecil College in Elkton. Raymond is a 2012 graduate of Rising Sun High School’s STEM Academy and will study biomedical engineering at Drexel University this fall.

Raymond’s Capstone Project researched utilizing shear thickening fluids as dampeners to reduce back-plane deformation. He focused on a mixture of water and cornstarch, which under pressure, he explained, thickens and acts like a solid. He told members of the NMTC and their guests his experiments used a tower to drop a strike bar onto a clay witness, a standardized testing product to measure backplane deformation. When the shear fluid was in place, backplane deformation was reduced by as much as 50 percent.

Raymond’s project extended research being conducted at Aberdeen Proving Ground, where scientists are looking at the substance for use in body armor. He tested the substance’s ability to stop blunt force trauma, such as a strike from a crowbar or a bat.