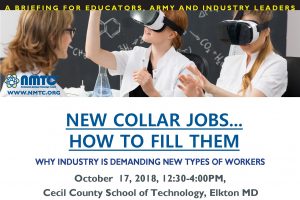 The 16th NMTC STEM Summit was held Oct 17, 2018 at the most inviting educational facility ever to host our summit, the Cecil County School of Technology, 912 Appleton Rd, Elkton, MD 21921

ALL THREE PRESENTATIONS MAY BE DOWNLOADED HERE

The focus of this summit, as is with all previous 15 summits, is to bring together the community of education, industry and government to to collectively see over the horizon as to what will improve and accelerate building our STEM educated workforce.

This summit brought together thought leaders to provide a call to action on where education, in partnership with industry, needs to undergo trans-formative change, like none seen in the modern age.  Changing technology, workplaces, and social norms place new demands on educational structures and industry training. The jobs themselves will no longer fit traditional classifications, but morph into what IBM has identified as ‘New Collar” jobs.

Many of the skills and fundamentals for these ‘New Collar” jobs are best secured via creative internships and apprenticeships, in tandem with classroom studies.

The actual highlight was a tour of this incredible school and it’s state of art vocational labs and classrooms. 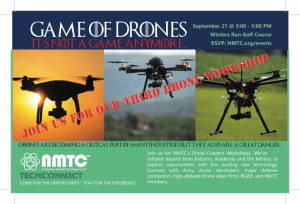 This TECHCONN3CT workshop conveyed the variety of drone technologies, with the offer to fly them on the drone simulator,and get answers from panel experts (including BG&E and former advisor to Sec of Defense).

Unfortunately, rain prevented our traditional flying of the drones over the Beautiful Winter’s Run Golf course.
New this year, driven by recent public events, we included the unfortunate downside of this technology,
While a looming $100 billion industry, the downside is drones used to spy on you, and by terrorists in easily deployed, hard to detect drone swarms. For better or worse, drones will play increasingly significant roles in our lives and businesses.
A special gesture by one of our speakers, was NVision4D donating a $150 drone package raffled off that day. In addition, SURVICE Engineering displayed their latest, almost car-size military drones.
Topic covered were:

Followed by a Panel discussion for Q&A

$20,000 Scholarships Awarded to Women In STEM

The Northeastern Maryland Technology Council (NMTC), through the generosity and commitment of Bravura Information Technology Systems, and their founder Claudine Adams, announce the initial four recipients of their NMTC/Bravura Women In STEM Scholarship Program for 2018.

This unique annual program of four $5000 scholarships, open to women graduating from Harford and Cecil County Maryland public schools, pursuing a four-year degree in the fields of Science, Technology, Engineering, or Mathematics (STEM), are awarded scholarships as follows, based on a rigorous eligibility process:

Nia Hammett,
Edgewood High School,
pursuing a degree in biology,
to later research neurology and cancer of the brain. 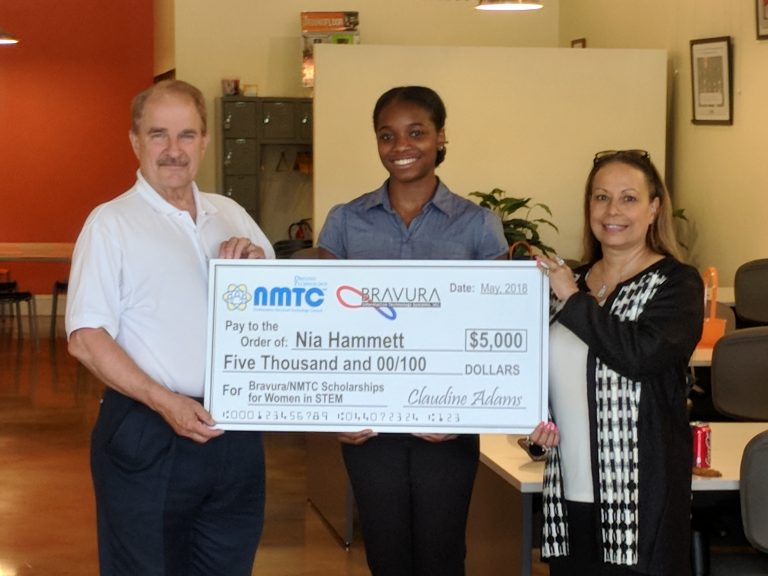 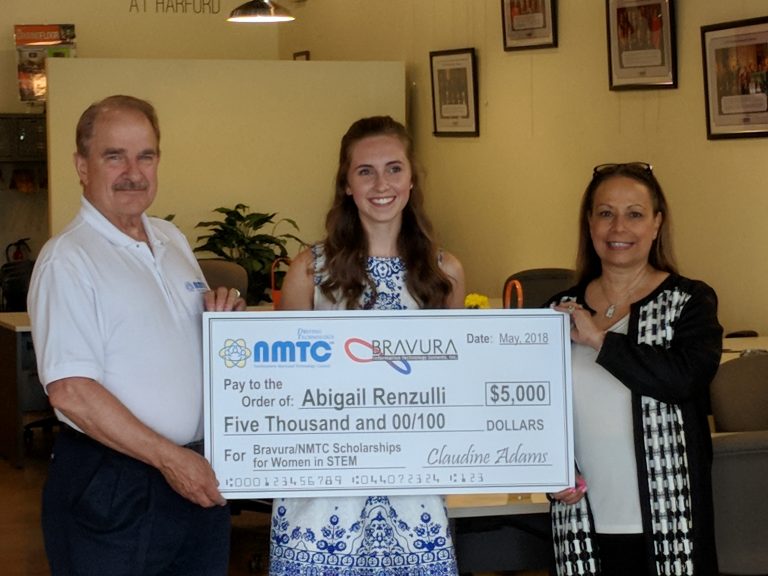 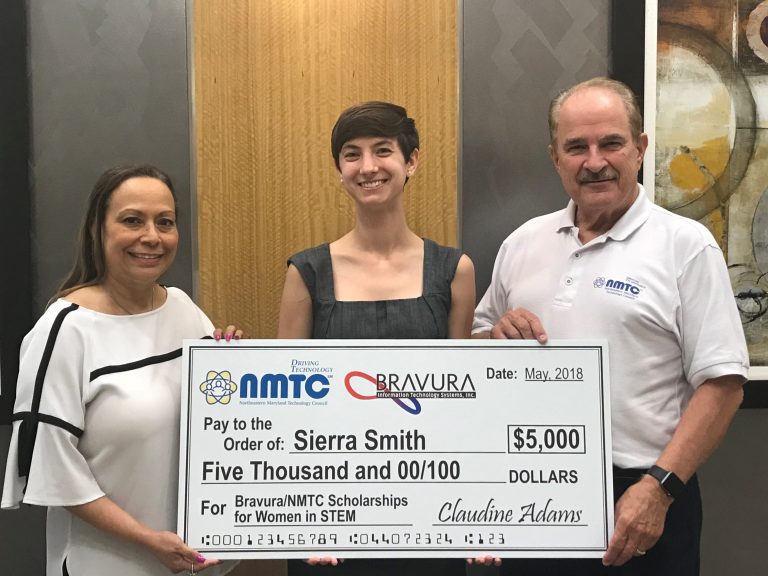 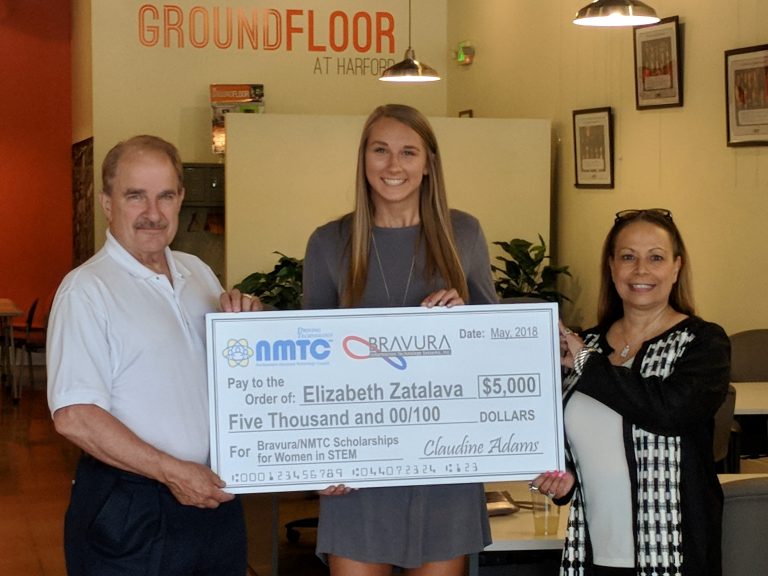 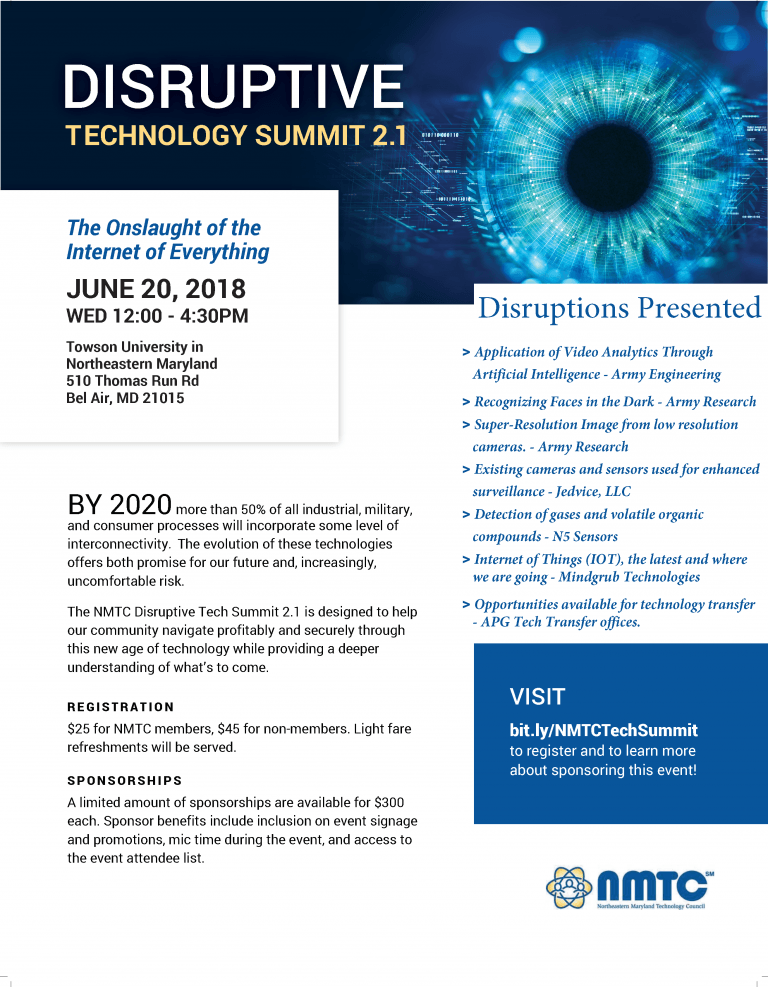 That crazy future promised in science fiction stories is slowly starting to show up.

The Onslaught of the Internet of Everything discusses ‘Sensors, Surveillance and (No) Secrets’

The NMTC Disruptive Tech Summit 2.1 brought together the expertise, examples and education of seven research scientists, business CEO’s and newly patented technology inventors to show the 50 attendees how to navigate profitably and securely through these evolving technologies, while understanding the future skill sets needed to master them. 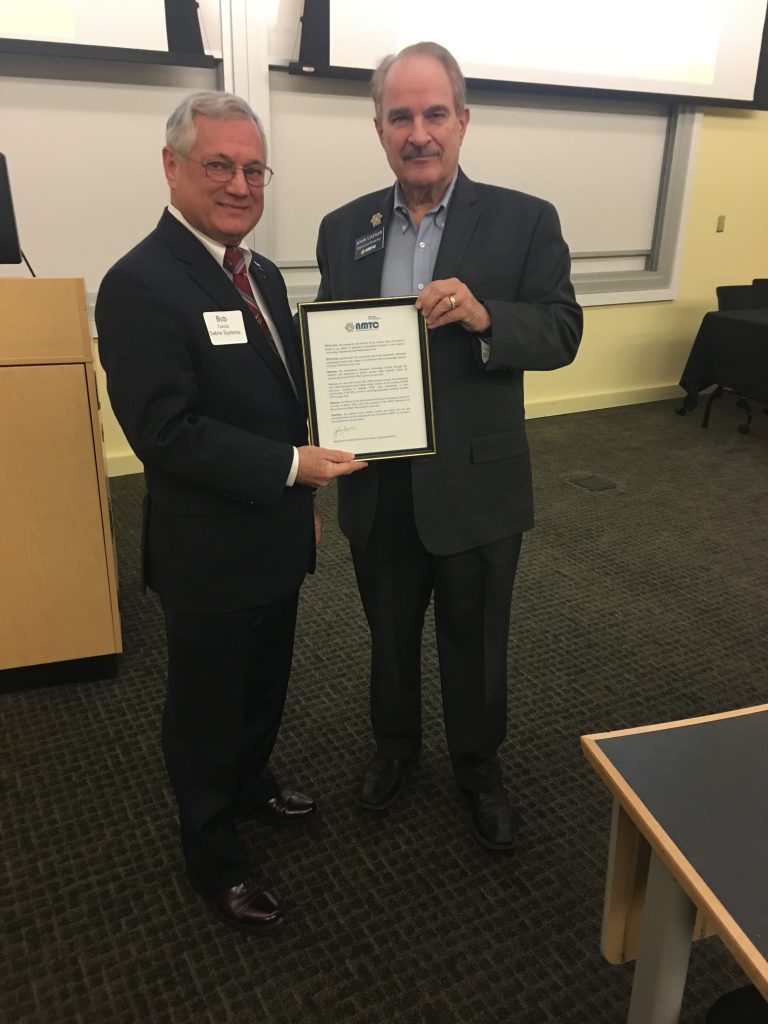 Robert Carullo (L), Sabre’s Director of Science and Technology Partnerships was honored at NMTC’s 15th STEM Summit ( Disrupting the Classroom: the impact of technology) for his pioneering actions and considerable contributions to the organization over the last 8 years. This includes but is not limited to his involvement in the creation of NMTC’s STEM Summit which acts to foster partnerships between businesses and the region’s schools to bringing new ideas and opportunities to educators and classrooms.

The summits have contributed immensely to building our future STEM educated workforce, for both the Army and industry, by creating and hosting STEM Nights in dozens of middle schools for over 6 years where they reached over 5,000 students, plus recruiting parents to start numerous STEM Clubs. Lastly, and most important, it generated the annual Visionary Awards to honor  the many STEM VOLUNTEERS. This past February 22, at NMTC’s annual Visionary Awards, we honored 15 of these volunteers, attended by over 250.

Dr. Perconti, US Army Research Lab Director Named 2018 Visionary, Along with 14 Other Honorees

Havre d Grace, MD ― A select group of Marylanders will receive the prestigious Visionary Award on February 22, 2018, for their contributions in building our STEM educated workforce, and advancing technology and innovation to grow our economy and protect national security. The ceremony is the largest in Maryland, held at the Richlin Ballroom in Edgewood, MD, and now in its seventh year. It is typically attended by more than 250 leaders in industry, government, and education.

“We honor remarkable people who continue to play key roles in moving our region forward in the areas of STEM education and technology,” said NMTC Board Chair, Michael Parker. “These are individuals who selflessly donate their time and talents to make a difference in our community.”

The 2018 Visionary Award honorees are: